These CAMPO shows are going on tour in November!

In the Middle of Nowhere

In September, we kicked off CAMPO's autumn season with Kristien De Proost's new production In the Middle of Nowhere. Together with the Brazilian Frederico Araujo, she focused on the paradox of the middle: how humans simultaneously want to belong to others and stand out from them. A theme more topical than ever, in a world increasingly dominated by data, norms and averages. E-tcetera therefore described it as a "playful and layered performance that places a critical note on what we see as the middle and the average". Or in the words of Evelyne Coussens (De Morgen): "Imagining oneself to be the centre of things is human, albeit just a little more western."

After a tour that took them from Flanders to the Netherlands and Switzerland, the team behind the production will play in Aalst in early November before getting a well-earned rest.

In Ambient Theatre Fury, Anna Franziska Jäger and Nathan Ooms start from the observation that contemporary culture is increasingly permeated by so-called 'ambient' experiences. Netflix series, popular songs, but also the streams of our social media feeds: they emerge from a specific intersection of frivolous pleasure with banal seduction. They generate a form of absence; it is a kind of pseudo-activity that numbs the sense of time and demands a certain impassivity from the subject. What happens when this ambient quality is magnified and amplified so that it rages furiously across the stage without restraint?

This summer the show got to play at Theater Aan Zee in Ostend, and will travel to Germany in November before returning to Bruges and Beveren afterwards.

In 2017, Jaha Koo's CAMPO-production Cuckoo premiered, and five years later the show is still touring. Just last week, for instance, it played at the 33rd edition of Festival Internacional de Marionetas do Porto. In bittersweet and funny dialogues, Jaha, together with his electric rice cookers, takes the audience on a trip through the last two decades of Korean history. In it, he combines personal experiences with political events and reflections on happiness, economic crises and death.

Those who still want to see Cuckoo soon (or any of Jaha's other work) will have to travel to Portugal or Taiwan, but in between touring he is also working on a new creation, scheduled for 2023!

Out of the Blue & Pleasant Island

Out of the Blue premiered at the Kunstenfestivaldesarts in May 2022. In the middle of a long tour, the show also finally came home to CAMPO at the end of October. In November, Silke, Hannes and the rest of the team will travel to Lisbon and Prague where they will play at the Alkantara Festival (together with Jaha Koo) and Akcent festival respectively. Afterwards, Out of the Blue returns to Flemish theatres.

Even the show's predecessor, Pleasant Island, which was the second part in Silke and Hannes' trilogy on mining, is not done touring yet. The performance will be in Bruges at the end of November.

In All Inclusive, Julian Hetzel places art next to war and tourists next to refugees. In this way, the theatre-maker questions the aestheticisation of violence and the explosive power of images of war. Theaterkrant described it as "a performance as brilliant as it is painful, a shot at our own morality".

As a result, the performance has been touring since 2018 and is in Poland next month, but first it is Roeselare's turn at the end of November. 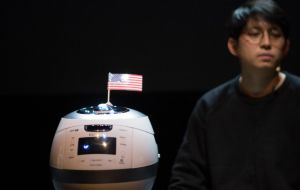