"Menzo shows that she is a very strong performer, able to switch effortlessly from feminine to masculine and animalistic. She is mesmerising and doesn't let go of you." - Jury Best of Fringe Award 2019

In the duet DARKMATTER, with the help of a Distorted Rap Choir, Cherish Menzo and her onstage partner Camilo Mejía Cortés, look for ways to detach their bodies, and the daily reality in which they move, from an imposed perception.

For DARKMATTER, Menzo draws inspiration from post-humanism, in which the physical gets transcended. She also studies afrofuturism, which looks at mainly science fiction, technology and fantasy from an African or black perspective. The human form becomes something real and allows us to dream. Menzo also weaves a poetic layer into it for which she gets the mustard from astronomy. Among other things, she looks at dark matter and at black holes that meet and collide to give birth to a new, futuristic and enigmatic body.

DARKMATTER wants to get rid of a biased way of looking at one's own body and that of the other – and the stories we attribute to it. Menzo also throws her own body into battle, which results in a complex conversation that she wants to both enter into and transcend – a duality that feeds DARKMATTER.

And just like that the performance looks for a new form for – and way of – looking at our body and the complex outside world to which it relates. 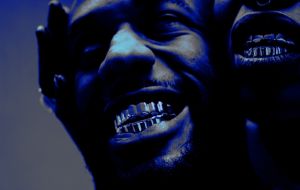