Get through the winter with the one and only CAMPO scarf! - Come to the Belgian premiere of "Jerusalem" at CAMPO! - CAMPO supports march against hate and racism - OPEN CALL: BOK learning days

Fasten your seatbelts, because the new season of CAMPO starts with a bang! Next to our own productions of Kristien De Proost and Silke Huysmans & Hannes Dereere, Kim Noble kicks off the autumn during Het TheaterFestival. And after two years full of restrictions due to the pandemic, the Buurtkeuken and CAMPO Party! are back!

With the arrival of het TheaterFestival (8 - 18 sep), the theatre season traditionally starts. CAMPO is also present, as with the selection of Lullaby for Scavengers, Kim Noble closes the first festival night. It is already the third time that the CAMPO performance. Afterwards Kim will kick off a series at the renowned Soho Theatre in London and tour Prague, Leipzig and Warsaw.

With Kristien De Proost, CAMPO presents the first premiere of the CAMPO autumn. In In the Middle of Nowhere she emphasizes together with the Brazilian Fred Araujo the paradox of the middle. After the premiere in Ghent the performance will tour extensively in Flanders.

Silke Huysmans & Hannes Dereere show after Mining Stories (2016) and Pleasant Island (2019) the last part of their trilogy about mining. Out of the Blue, a CAMPO production that successfully premiered at the Kunstenfestivaldesarts in May, takes a closer look at a completely new industry: deep sea mining. "Their approach is both documentary and spectacular, through a dramaturgy that is chiselled, ambitious, rigorous and very humble," wrote La Libre. Out of the Blue received favourable reviews in many other media and will be shown all over Europe in the autumn.

In Necropolis, Arkadi Zaides, associated with laGeste, acknowledges countless refugees and migrants who die anonymously in their attempt to reach Europe. Zaides tries to give back the freedom of movement to those whose only crime was arriving in Europe.

We can also look forward to the creation of the duo Louis Janssens and Willem de Wolf. In Analoog (DE HOE), who inhabit the first floor of CAMPO boma, they sing and talk about childhood, mothers and about searching disruptive loves.

tg STAN, Scarlet Tummers and Atta Nasser treat visitors to the last Belgian premiere of the autumn. With Jerusalem, the two makers, from The Hague and Jerusalem respectively, conduct a quest for identity, insight, faith and their interpretation of what Jerusalem stands for.

In DOOM, the second part of her trilogy about the praise of vulnerability, Teresa Vittucci investigates the origin of femininity together with composer Colin Self. In May, CAMPO presented the first entitled Hate Me, Tender, in which the Virgin Mary is central. This confrontational, humorous and personal performance won Vittucci a lot of praise in her homeland Switzerland.

Finally, we see Cherish Menzo, connected to GRIP (which also supports and produces the work of Jan Martens), back at CAMPO for a second time. DARKMATTER is at least as impressive as her previous performance Jezebel. Together with partner Camilo Mejía Cortés she wants to get rid of the preconceived way of looking at our own bodies and those of others - and the stories we attribute to them. DARKMATTER premiered succesfully at Kunstenfestivaldesarts.

Also impressive is the latest creation by Samira Elagoz. Seek Bromance is a filmic performance about a transforming relationship between two trans men with very different views of what masculinity can be. Elagoz won the Silver Lion at the Venice Biennale with this performance.

Back with the same recipe for success: the Buurtkeuken! Every month the whole neighbourhood of CAMPO Nieuwpoort is invited to dine together on stage. And last but not least there is our famous CAMPO Party! Get ready for a great party with steaming beats and melting bodies! Stay tuned, more information will follow! 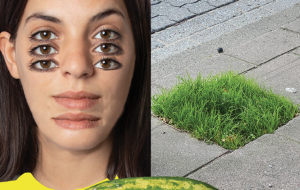