Since Jonas Vermeulen and Boris Van Severen obtained their Master’s degrees in Drama/Cabaret in June 2013, they first persuaded the KIPfestival of the quality of their graduation production The Great Downhill Journey of Little Tommy, and then TAZ, after that the Edinburgh Fringe Festival and then the rest of the world. It was a performance in the form of a concert whose hard rock made the theatre shake on its foundations. They went on an extensive international tour and won the Roel Verniers Prize at the Theatre Festival, the Audience Prize and the Big in Belgium Prize at TAZ and the Scotsman’s Fringe First at Edinburgh, as well as being nominated for a Music Theatre Award and the Total Theatre Award at Edinburgh.

Jonas Vermeulen (1990) acted in productions by Toneelhuis, HETPALEIS, Ontroerend Goed and Comp.Marius. He also did film and television work, including In Vlaamse Velden, Den Elfde van den Elfde and Ay Ramon! Music is equally one of his passions. He has been successful with his own rock group, Psycho 44, from the final of Humo’s Rock Rally, his own EP and CD plus several invitations to Studio Brussel, to supporting act for Queens of the Stone Age, with performances at Pukkelpop, Dour, Groezrock, the Sportpaleis, the AB and elsewhere. Vermeulen is also regularly employed as a musician or composer in the theatre world.

Boris Van Severen (1989) has been appearing onstage since he was a child. With the Kopergietery he has travelled in Belgium and abroad in plays including Brief, Rennen and De Matrassenkoning. While studying Cabaret he was asked to perform in productions by the KIP and KVS. For the KIP he acted in, among other plays, Chicks for money and nothing for free and De slimme de dome de gladde and de dode. Since July 2015 Van Severen has been a member of the permanent team at the KIP. Like Jonas Vermeulen, he is also often employed as a musician. For the film Belgica he collaborated closely with Soulwax. He recently became the guitarist with Nightman, Tijs Delbeke’s new band. He was in the spotlight as a ‘Young Star’ at the 2016 Ostend Film Festival. On screen he has appeared in De 16, Ben X, In Vlaamse Velden, Belgica, De Ridder, Vriendinnen and Salamander 2. 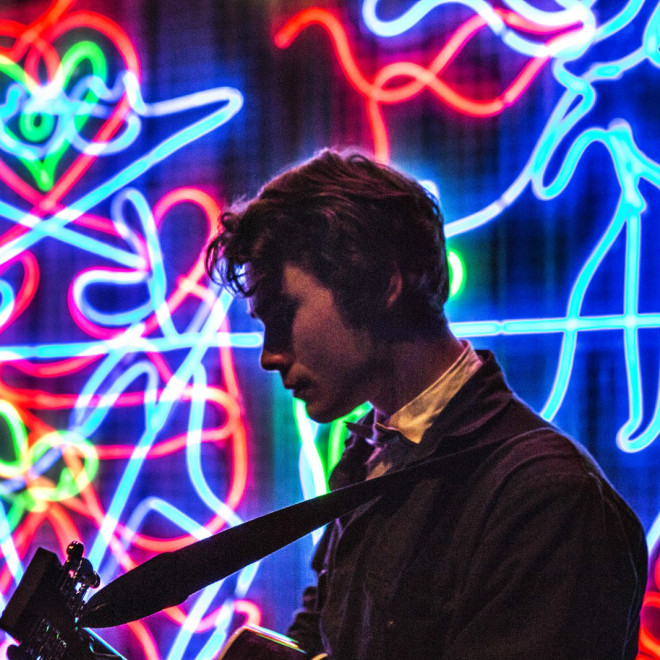