At London Southbank Center, Tim Etchells & Forced Entertainment produce the first British remake of That Night Follows Day. The original version of the performance was produced in Dutch with CAMPO and toured the world following its premiere in May 2007, making 180 public performances.

Through a chorus of children aged between 8 and 14, the comical and poignant piece interrogates the ways in which the adult world shapes and defines that of young people, offering up the full range of advice, facts, white lies and excuses children hear from adults. The performance explores how we are all both made and constrained by language as we try to describe our experiences and imagine our futures. 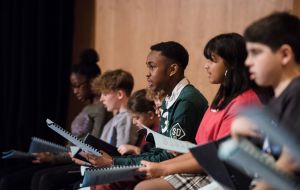