Partner organisations Vooruit, NTGent, CAMPO, KOPERGIETERY, S.M.A.K. and Opera Ballet Vlaanderen would have launched NO(W)WORRIES festival on Oct 28th. But then came corona, again. Choreographer Mohamed Toukabri should have presented his new creation during the coming days, as part of the festival. Unfortunately, due to the impossibility to receive a visa for his mother, who performs in this creation, this will not happen. Mohamed wrote a powerful letter that details the reality of creating artistic work at the moment. The letter is shared with you as an opening statement.

An open letter by Mohamed Toukabri

“All the animals, the plants, the minerals, even other kinds of men, are being broken and reassembled every day, to preserve an elite few, who are the loudest to theorize on freedom, but the least free of all.” - Thomas Pynchon

A few days ago the decision was made to cancel / postpone the creation of my newest production ‘The Power (of) The Fragile’, a duet together with Maimouna Latifa Khamessi, my mother. This would be the second cancellation / postponement in a row.

The first cancelation was due to the spread of COVID-19 and the subsequent lockdown. The second, because my mother was not given the visa authorisation to enter Belgium from Tunisia. Her contract for nine weeks of rehearsals and for nine performances in four different venues had been signed, her work permit was ready and her COVID-19 test was negative.

Not essential? My mother was supposed to join an artistic team to take part in an international artistic project worth 65.000 euros, being supported by the Flemish authorities and the Vlaamse Gemeenschapscommissie. An international project co-produced by the artistic organizations Beursschouwburg, Vooruit and Needcompany with performances for which tickets had been sold and audiences were waiting.

Cancelations imply financial damage, but let’s not forget to give space to an even more important factor: the psychological, mental and emotional impact. Who will take the responsibility for all this mental, emotional and financial damage?

Politicians are contributing to a total crash of cultural and creative sectors by imposing rules which are not applied to other sectors. Cultural workers are no longer protected by the representatives of this government. Cultural venues, event organisers, art workers and especially freelancers are facing a total catastrophe. Even when we create job opportunities, we’re blocked by the administration and regulations from the authorities: we need protection.

We urgently need appropriate support measures. Who will take this responsibility? Who can we address? What is the future framework for the sector? What is the plan? What is the vision for culture and cultural workers in the following weeks, months and years? Silence...

I have seen privilege, read about privilege, but I had never experienced what it meant to have civil privilege until the day I obtained my Belgian nationality and, as such, became a European citizen. That day, now two years ago, a heavy weight which I had carried for the past ten years living in Belgium, fell off of my shoulders.

During my mother’s visa procedure, and ultimately facing the decision that she is not allowed to enter Belgium from Tunisia, I was again confronted with privilege. Tunisia was the first North African country to reopen its borders since the lockdown. And, yet, it is clear that the corona crisis is being used by European administrations to control the movement of non-European citizens. In this situation I felt so angry to the extent of wanting to let every person holding a European passport know how privileged they are. And, I myself am one of these people.

Some of my friends and good intentioned professionals asked: “why not turn this new production into a zoom performance?”. My answer: “no”.

Why would I share my mother’s presence on stage in countries where she is barred entry? I am aware that such a method has been successfully used in other artistic works and aided the visibility of those who couldn't be physically present, mostly in the context of conflict or war. In my specific case, as a maker whose principal performer wasn’t given the authorization to enter the country, I see it as an act of resistance.

This is about white privilege pushing people out of borders while claiming them back online. To invite my mother physically on stage is the whole purpose of this creation. I am standing hopeless, powerless, helpless. I don’t know what to think or how to feel knowing that on one side - the other side - stands the person who has offered me life, that person who is called mother. Who carried me inside her belly and fed me for a whole nine months, then gave birth to me.

Despite who you are and where you are, today more than ever I invite you to stop for a moment, to reflect and acknowledge your privileges. Obviously I am not the first, nor the last, who will share these words with you. But, I invite you to work with me, to raise your voices in order for our governments to treat people equally.

It’s our task as members of a society to take our personal responsibility to cultivate our thinking. How can we start shifting our focus from the individual towards the community? Until when will the presence of people who aren’t in possession of a privileged passport continue to be ephemeral? How do we ensure that people and artists aren't reduced to being merely content for online consumption?

I hope my simple words and sentences translate because, as a dancer, I have spent more time crafting and mastering the language of my body than the language of writing. I am used to expressing myself through movement - which is basically the embodied and bodily translation of my thoughts. But, looking at the world around me, seeing all the injustice and inequality, little by little I have started realising that we live in a world that has always belonged to others: the elite, the privileged, those who hold power, those who decide who can live and breathe and who can’t, those who master the culture of appropriation, oppression and the language of manipulation.

I need to learn the rules of that language, since language shapes our way to think and see the world. In our political and politically correct world I have come to realise that language is what will help me to protect myself. Language will empower me; a necessary step towards freedom.

Mohamed Toukabri (The Upside Down Man) 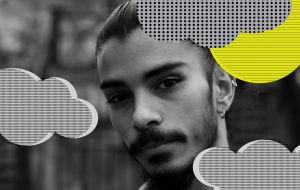