CAMPO's autumn season comes to an end in December, but these CAMPO shows will continue to tour in December!

Out of the Blue
Silke Huysmans & Hannes Dereere

Out of the Blue premiered at the Kunstenfestivaldesarts in May 2022. In the middle of a long tour, the show also finally came home to CAMPO at the end of October. After playing in Lisbon and Prague in November (at the Alkantara Festival and Akcent Festival respectively), Silke, Hannes and the rest of the team returned to Belgium on 3 December for the final screening of the year at CC De Grote Post (Ostend).

In Ambient Theatre Fury, Anna Franziska Jäger & Nathan Ooms start from the observation that contemporary culture is increasingly permeated by so-called 'ambient' experiences. Netflix series, popular songs, but also the streams of our social media feeds: they emerge from a specific intersection of frivolous pleasure with banal seduction. They generate a form of absence; it is a kind of pseudo-activity that numbs the sense of time and demands a certain impassivity from the subject. What happens when this ambient quality is magnified and amplified so that it rages furiously across the stage without restraint?

This week, the duo is performing two nights at Frascati (Amsterdam), to finish at the Kaaitheater in Brussels at the end of December with the last Ambient Theatre Fury's of the year!

In All Inclusive, Julian Hetzel juxtaposes art with war and tourists with refugees. In this way, the theatre maker questions the aestheticisation of violence and the explosive power of images of war. Theaterkrant described it as "a performance as brilliant as it is painful, a shot at our own morality".

Consequently, the performance has been touring since 2018 and is at the Nowy Teatr in Warsaw (Poland) this month, where Kim Noble's Lullaby for Scavengers also ends the year.

A fox, a maggot and a (singing) dead squirrel are Nobles' companions in his quest for friendship and acceptance. As gripping as it is unsettling: a performance about big feelings, wishes and dreams, fear and loneliness, and humour. Lullaby for Scavengers played at CAMPO for a third time in September, and returns in February due to great success! But first, like All Inclusive, the performance will play at the Nowy Teatr for two nights this month. 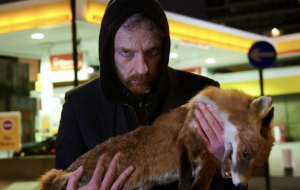