Poverty is on the rise in our city, but so is solidarity! De Armste Week ("The Poorest Week") raised 140,000 euros for the fight against poverty last year, this year we are going for one million!

You too can support The Poorest Week in 4 ways:
- order a meal during La Grande Bouffe (12 to 19 December)
- make a donation to account number BE66 8901 5428 9443 or via our website
- bid at the art auction, including works by Berlinde De Bruyckere
- register your own fundraiser

De Armste Week (this year from 12 to 18 December) is an initiative and city-wide action by the Ghent Kunstenoverleg, Refu Interim, Cirq, the Ghent Solidarity Fund and Burgerplicht Gent in cooperation with numerous cultural organisations, bars and restaurants, community workers of the City of Ghent, KRAS Gent, AVS... for the benefit of the fight against poverty.

With this action we want to collect much-needed funds for people in need, engage citizens and raise awareness about poverty in Ghent. With the money collected, volunteer organisations buy food, medication, clothing, school supplies, etc.; where possible, support is provided to pay rent or EGW costs.

This year, numerous fundraising actions are planned again, such as La Grande Bouffe, CIRQ TV in collaboration with AVS, a massive auction, a closing event in Chinastraat, a party by 9000 Nightlife United, ... and numerous personal initiatives such as the Fair Pay Cup by Sportaround, a Stand Up Paddle Boarding round trip, solidarity radio by Urgent FM, a Four in a Row tournament, cooking actions and sale of Christmas decorations, ... A wave of solidarity will flood our city.

Moreover, this year we are also counting on our Red Devils to challenge us to become World Solidarity Champions. We are asking for 1 million for charity. Also wondering if we will succeed? 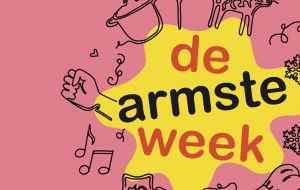