Rau: CAMPO deliberately approaches artists who don’t normally work with children. I must admit that I’m surely the weirdest choice in the series. We’ve certainly worked in many different countries and fields, with both amateur and famous professional actors, with both mass murderers and highly sensitive performers, both in improvised locations in war zones and in government-subsidised theatres. We’ve adapted classics, created narrative theatre, and organised popular trials, but we’ve never worked with children. I think that in the final analysis, as with all our projects, it was the thrill of the challenge which won us over; we wanted to try something completely new.

With ‘children’s theatre’ you actually think automatically of an idea spread mainly in performance art of simplicity and authenticity, with the motto that children and fools tell the truth.

That’s right. Obviously, we did some preparatory research and noticed that productions with children always follow the same patterns. They cover visions for the future, the absurdity of the adult world, authenticity, fairy tale-style poetry. They tell bizarre life stories, adorned with rehearsed music, a performance of innocence. For us it was clear: We wanted to try something completely different. We wanted to show something which people don’t want to see from children. Five Easy Pieces had to be a children’s theatre performance which was risky, unprecedented and virtually impossible.

The work is inspired by the Dutroux affair. Dutroux is seen as the essence of evil, the child molester, probably the most hated figure in Belgium. What else did you learn from your research, how do you want to portray him? And did you consider letting him speak for himself?

I encountered the figure of Dutroux as a national myth in 2013 during my research for ‘The Civil Wars’ in Brussels. During the rehearsals, I asked the actors what Belgium was for them, and when they really felt Belgian. Because Belgium is a culturally divided and, actually, an impossible nation formed in the nineteenth century as a buffer between France and Germany, and it never really grew together. Those actors replied: during the White March in 1996, the major demonstration against its own government as part of the Dutroux affair.

Is Dutroux really the only collective myth in Belgium?

Disturbing, but that’s what it looks like. If you look a little deeper, you certainly recognise a lot of parallels: Dutroux, who grew up in the former Belgian colony of Congo, who entered into his crimes in the now waste mining region around Charleroi, whose trial almost led to the implosion of Belgium and a rebellion of society against its own corrupt elites – that’s almost an allegory of the decline of the western colonial and industrial powers. With him and through him you could narrate a history of Belgium. Then, obviously, there’s the fact that everyone in Belgium has their own opinion about him, even children know something about him. That’s why he’s not on the stage to speak for ‘himself’: As in Breivik’s Statement, the fact is that it’s not the murderer and his psyche that we’re interested in, Dutroux himself is still a void, a field of gravity.

How can you approach such a theme with children between 8 and 13 years of age? Isn’t that too gruesome, too incredible, too shocking for children?

Our team includes two advisers and also a child psychologist. The parents were also closely involved in the rehearsals. And we contacted those most closely involved in the real Dutroux affair. But, actually, this production isn’t about the horror in itself. It’s about the big issues which lurk behind this very specific and utterly wretched Dutroux affair: the decline of a country, the national paranoia, the mourning, and the anger which followed the crimes. The production begins with Congo’s declaration of independence and ends with the funerals of Dutroux’s victims; in the background you perceive the disappearance of just about all the illusions which you might have lived under as a Belgian in recent decades: the illusion of safety, trust, freedom, and a future. These Five Easy Pieces bear a negative mindset and the titles of the five brief monological re-enactments correspond appropriately. One piece, for instance, covers the doubts of a father, whose adult son becomes a murderer. In another piece, the subject is clearly and directly violence and abuse. And a third one covers the deepest, darkest of all emotions, the grieving of parents for their child. Everything is (freely) based on original documents or interviews which we conducted with those involved in the Dutroux affair.

As Aristotle wrote, man is a creature of imitation. Children learn by imitation. What does it mean for a child to be confronted with the atrocity of the adult world?

At the start of rehearsals, we acted out some fragments with the children from Scenes from a Marriage by Ingmar Bergman. That was a special experience: The children understood intellectually what was happening in those highly intricate human scenes of Bergman and they acted them out, but without recognising the actual emotions, the underlying existential doubts. There is something quite natural and obvious on the stage, which doesn’t exist like this in real life. That was absolutely fascinating for me as director: How does the part designed to portray a person operate with unskilled actors who don’t have the daily and professional experience which is the subject of the scenes? How do you create concentration or precision in a group which is interested only in running around and playing games everywhere? Hence the title, the title of a book on learning to play the piano, which indicates a systematic learning process: Five Easy Pieces. How can children grasp the meaning of narrative, empathy, loss, subjection, disappointment, anger against society, and rebellion? And how do we react when we watch them learning on stage?

You’re well known for your very precise, even perfectionist production. How do children fit in with that method and to what extent do you have to ‘drill’ and ‘train’ them?

There are certainly two contrasting ways of directing, as Bergman says in his autobiography. Either you sketch the scenes very precisely right at the beginning and you give the actors all the freedom in the world. Or you do it the other way round, you improvise until shortly before the first showing and then, in the final week, you set everything in stone. Actually, I like to set out the framework and then let actors accept responsibility. However, for Five Easy Pieces, I’ve tried both ways, but I concluded that neither of these rehearsing methods works with children. Or, talking about the results, the drill and the trainer are always visible, however the working process passes off. I’ve never seen a production with children where the actual and tangible subject wasn’t right that there was a ‘director’ who had given the children a framework. And here it gets interesting in terms of both subject and form.

Children’s theatre for adults corresponds - on an aesthetic level and of course in a metaphorical sense - to what paedophilia is in a human relationship. It isn’t a mutually responsible love relationship, but a one-sided power relationship, where the weaker partner, namely the child, simply has to put up with it. In other words, with children’s theatre for adults the postmodern penchant for media criticism returns to its original target. And so, media criticism once again become criticism of reality. Doing productions with children means that you have to question existentially concepts such as ‘figure’, ‘realism’, ‘illusion’, and, obviously, ‘power’. We also want to show this process with Five Easy Pieces, precisely because the ‘pieces’ get more and more difficult. What starts as a role play (namely the good old Cindy Sherman question as to how we can portray Patrice Lumumba or Dutroux’s father on the stage) leads to basic questions about the violence of directing. From a naturalist guise, from a gruesome desire to mimic, slowly but surely, you drift into a meta-study on performance art and its practice of change, subjection, and rebellion.

And so, Five Easy Pieces isn’t just a production about Marc Dutroux and how you approach the depravities of mankind with children, but also a fundamental reflection on what it means to create theatre.

We’ve been making theatre plays and films for 15 years now. We’ve done everything, from minimalist performance and political action to ironic show, including radio plays, video clips, films, books, and congresses. This spring, we receive the ‘World Theatre Prize’ from the International Theatre Institute, a kind of lifetime achievement award. Then, you sometimes wonder: what next? Just another fifty plays, films, and books? In short, it’s the right time for a project covering absolutely basic issues. What does it mean to be ‘someone else’ on stage? What does it mean to ‘mimic’, ‘empathise’, and ‘relate’? How do you cope with being looked at? How do you explain it and how do you do it? And, for that matter, this basic questioning of theatre isn’t an intellectual decision: Things which are completely obvious for adult performers are morally and technically impossible with children. You can get rid of all those parochial Stanislavski tricks, the entire intensity myth of the performance tradition. And in the end, that’s a pretty frightening thought. 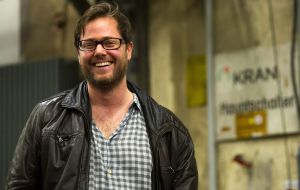 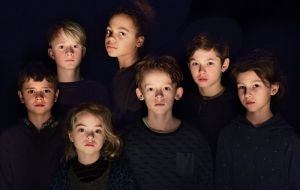